With a Foreword by Frank Sesno 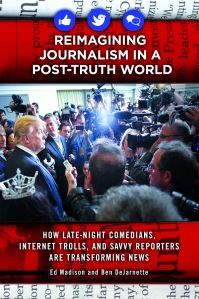 In a world of “alternative facts” and “post-truth” politics, producing public-interest journalism is more important than ever—but also more complex. This book examines how journalism is evolving to meet the demands of the digital media ecosystem, where lies often spread faster than truth, and where modern news consumers increasingly expect journalism to be a conversation, not a lecture.

“That journalism in the United States and worldwide is in a deep and seemingly worsening crisis is becoming increasingly clear. The business model of commercial journalism is in its death throes, yet societies desperately need this grand public good if any semblance of democracy or freedom is to survive. Reimagining Journalism in a Post-Truth World is a hearty attempt to take stock of the swirling changes, make the best of a very bad situation, and rethink journalism by reconfiguring the existing cast of characters, institutions, and options. It is a necessary contribution to a larger conversation our entire society, not just the journalism community, needs to have. The sooner, the better.”

—Robert W. McChesney, Gutgsell Endowed Professor, Department of Communication,
University of Illinois at Urbana-Champaign, and Coauthor, The Death and Life of American Journalism

Pimp-controlled sex workers, exploited migrants, domestic servants, and sex trafficking of runaway and homeless youth are just a few of the many forms of sex trafficking and labor trafficking going on all around the world—including in the United States. This book exposes both well-known and more obscure forms of human trafficking, documenting how these heinous crimes are encountered in our daily lives.

“By carefully documenting the realities of human trafficking and the failures of prevention and enforcement, this eye-opening book is the antidote to every hyped scare story and pointless policy ‘solution.’ Knowledge is more than power — it is our obligation if we truly want to help the most vulnerable victims of sexual and labor slavery.”

“[Mehlman-Orozco’s] meticulous research is based not only on a survey of the available literature, but also on her own interviews with victims, perpetrators of human trafficking, and the consumers who patronize their businesses. [Her] prose is both lucid and emotionally stirring, and she often illustrates her points with personal anecdotes to paint a picture that transcends statistical analysis. The subject matter can be disturbing—the chapter devoted to child sex tourism is particularly harrowing—but she navigates that dark terrain with grace and professionalism. She helpfully suggests a number of ways the response from law enf

BRONZE: Financial Nutrition for Young Women: How (and Why) to Teach Girls about Money, by Melissa Donohue, Ed.D. (Praeger)

A powerful resource for all women who want a better understanding of financial empowerment, this book provides an easy-to-follow approach for adults to teach girls about money—and for girls to do some learning on their own.

“Financial responsibility and knowledge are intertwined, and women often have too little of the former and, for that reason, not enough opportunities to learn about the financial realm. This puts them at a disadvantage in their interactions with employers, partners, and with others who provide services ranging from health care to home repair. The cure lies in educating young women and girls, and Financial Nutrition for Young Women teaches readers both money management skills and confidence-building negotiating skills, ensuring that the next generation of women start with a level playing field in dealing with money matters.”

—Linda Babcock, James M. Walton Professor of Economics at Carnegie Mellon University and Coauthor of Ask for It: How Women Can Use the Power of Negotiation to Get What They Really Want

“This is an excellent resource for high school, public, and academic libraries. Anyone doing research in the social sciences will find this detailed portrait of contemporary American society very useful.”—Booklist, Starred Review

“Well written, thoughtfully organized, and timely, this set would be a good addition to most reference collections. It would be especially useful for community college libraries and those supporting a large proportion of first-generation college students, as the topics covered will be particularly relevant.

Summing Up: Highly recommended. All libraries. All levels.”—Choice

“The pieces are well written . . . VERDICT Of interest to high school and college students.”—Library Journal

GOLD: Write Like a Pro: Ten Techniques for Getting Your Point Across at Work (and in Life), by Carl Hausman (Praeger)

For those looking to become great business writers, this practical guide supplies clear instruction and examples of how to organize thoughts into written form, impart information with pinpoint accuracy, persuade, and hold the reader’s interest: in short, to use language to get what you want.